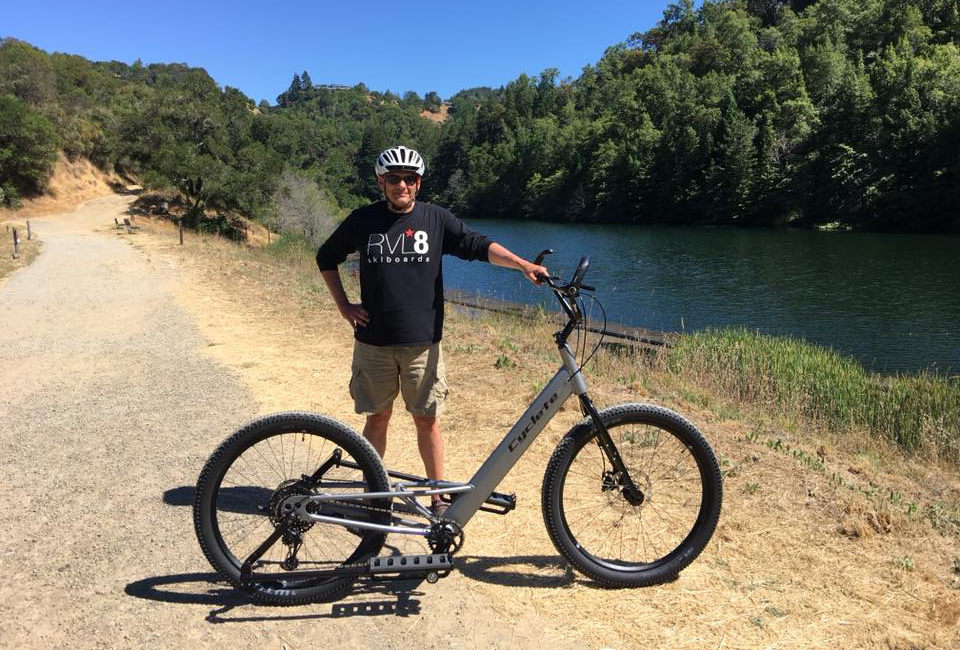 I recently had the pleasure of visiting the Cyclete headquarters located in the San Francisco Bay area. Upon arriving, Mr. Ascher kindly gave me the grand tour of his workshop. He started with showing me the painted frames and the high-quality components that are used on the Cyclete. I could immediately tell that superior thought and design had gone into this stand-up bike. The frames are absolutely beautiful, and all components used are top-notch.

After our introduction and my tour of Steven’s workshop, it was time to test ride the Cyclete. Steven loaded up two of his Cycletes onto his 1UP rack, and we headed to a paved bike trail nearby. The Cycletes had big 29+ tires that I was excited to try.

Going forward from here, I’ll be doing a comparison of the Cyclete to the ElliptiGO 11R. Why? Because ever since first learning about the Cyclete, I was hoping it would be the cure for what I find wrong with my ElliptiGO. Remember that these are my opinions about the GO, and opinions are subjective. I’ve been riding the GO for five years now. It’s been a wonderful stand-up bike that I have loved, but it has limitations and what I’ll call annoyances. Does the Cyclete overcome these limitations and annoyances? Short answer is… Most definitely!

Compared to the ElliptiGO, the Cyclete is easier to get on and off of. I think Steven said the pedals are six inches shorter in height than the GO’s and the same as the height of a normal bike. This makes a very noticeable difference when starting and stopping. The stop/go feels easier and safer. The Cyclete turns on a dime. I was able to do a u-turn within the width of the bike path. If I had been on the ElliptiGO, I would have definitely gone into the grass to make the turn. Let’s talk about wind resistance. Riding the GO in a headwind is brutal. For some reason it was not difficult at all compared to the GO. Steven and I discussed this. He thinks that the tray on the bottom of the ElliptiGO could be creating more resistance. Whatever the reason, the Cyclete doesn’t seem to be affected nearly as bad by wind as the GO is. That is a benefit that I wasn’t expecting. Another benefit I wasn’t expecting was not needing to reposition my hands on the grips continually while riding. When riding the GO, I’m constantly changing my grip because my hands and arms get tired. I didn’t have this problem while riding the Cyclete. Maybe it’s due to the angle of the handlebars or ergonomics in some other way. I don’t know, but it’s another nice benefit of the Cyclete’s design. Now let’s talk about an annoyance. The sound the ElliptiGO makes, the noise that comes from the rollers going up and down the enclosed tracks. A person gets used to the noise after a while, but it’s not pleasant. The Cyclete is whisper quiet. It’s so nice! I dread going back to riding the GO and hearing that noise again. Ugh!

The final comparison needs its own paragraph. What I’ve longed for in a stand-up bike is the ability to go off pavement. The ElliptiGO uses skinny 20-inch tires which do an adequate job on asphalt, concrete, most hard solid surfaces. When you try to ride the GO on dirt, sand, gravel, mud, rock, grass, it struggles. The GO not only ends up with debris in the tracks (which requires stopping and cleaning out) it also feels unsafe. Well, the Cyclete has no problem riding off pavement. It has larger off-road capable tires and a track system that debris doesn’t build up in, a much smarter design IMO. After riding the paved trails, Steven and I rode some mountain bike trails. The Cyclete is the stand-up solution I’ve been hoping for. I can now ride on all surfaces safely. I’m no longer stuck to riding just paved bike paths and on roads (which I hate). With the Cyclete I’ll be able to ride all the trails on my bucket list, paved or not.

Let me touch on a few other observations I had while riding the Cyclete. The teardrop motion of the Cyclete does feel like running. It’s a motion that isn’t tiring at all. I kind of hate to say this, but in a way, the Cyclete seems almost too easy to ride. I think I could knock out a 100 miles on it much easier than I do on the ElliptiGO. I’m going back to a comparison between the GO and the Cyclete. Sorry, but it can’t be helped. When riding the GO, a person has to pay close attention to what you’re rolling over. Cracks, bumps, ruts, or even slipping off the payment into rocks, dirt, or whatever, can mean wiping out. I felt safe and secure when riding the Cyclete. Rolling over cracks and bumps, and transitioning from one type of surface to another did not feel unsafe. It was a great feeling to have and made riding much more enjoyable.

Now for a little about the man behind the Cyclete. Steven is a super nice guy. He welcomed me into his home and showed me some great sites in the area. He’s extremely passionate and prideful about what he has created. He is very open to feedback and really wants his customers to be satisfied. It was a pleasure meeting him.

So after returning home from my visit, I told my wife all about the Cyclete and why I feel it’s not only the new way to move but also why it’s the better way. She said we should both sell our ElliptiGOs and order Cycletes. I agree!