The Cyclete Trail Runner by SASCHER and Bionic Runner by Run4 share some very similar evolutionary history with the same pursuit: to create a mobile machine that felt like running without the impact. SASCHER began 2007 in California, Run4 began 2011 in Queensland. We discovered each other on opposite sides of the world about 5 years ago. Some of our prototypes looked remarkably similar.  It was our last evolutions that took radical departures as well as our plans to bring our products to market.  Run4 took a bold approach entering immediately into mass production in China to produce a very affordable product.  SASCHER still builds each Cyclete one at a time in Marin California.  It is sad to me that the Run4 team is no longer in business – they created something special and did a terrific job marketing the Bionic Runner.

I have been asked what the difference is between the Bionic Runner and the Cyclete Trail Runner.  Of course some of these differences are very apparent at a glance.  Here I will attempt to elucidate the difference in the feel.

The Bionic runner employs an elliptical mechanism that is uniquely tipped forward to provide the stance and swing of running which it does but falls short in a couple areas:

1. It don’t mean a thing if it ain’t got that swing

Running has two phases the stance and swing. During the swing phase a machine that is supposed to feel like running must accelerate. If it doesn’t the motion will feel unnatural, unbalanced and sluggish. All elliptical mechanisms which utilize a single crankset including the Bionic Runner don’t accelerate into the swing phase. This ultimately feels a bit ponderous. Cyclete’s patent pending teardrop motion is the only mechanism with two cranksets dedicated to the two parts of running; a short stance crank and a long swing crank. The short stance crank provides the slower high gain motion and the long swing crank provides high speed low gain motion a runner would expect. Working in concert this mechanism creates the fluid powerful natural feeling Cyclete owners are talking about.

2. Heel to toe transfer of weight/energy.
The Bionic Runner, like the SUB, Arc and even HalfBike has platforms/pedals that pivot at a single point. This provides free motion but also provides support at only a single point regardless of the size of the platform. So your power can only be transmitted through that point. Your feet become tired if the point is under the ball of the foot. The pivot positioned under the arch is less tiring but also less effective at transmitting power (this is why some people try switching to regular pedals on these machines). The Cyclete platform is fully supported with a natural motion encouraging the normal rolling of your foot from heel to toe as you run. If you watch the video on the homepage you may note that the roller also moves under the running deck from heel to toe in concert with the running motion providing strong support under the area of contact and efficient transfer of power. More like the ground beneath your feet but without the impact.

Of course the Cyclete also provides the obvious benefits that come from much larger wheels and top shelf components.

Cyclete Trail Runner
Made in California

Bionic Runner
Made in China 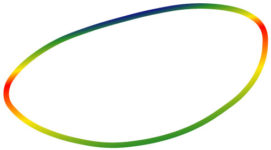